Due to high workload at the day-job, I haven't been able to keep my schedule regarding the experiment building a Ribbon custom control for LiveCode. It's still going to happen, but is going to take a bit longer than planned. In the meantime, I will post some tidbits that are relevant to those that design custom controls for LiveCode.

In MacOS X, the Preferences application has a panel titled Appearance: 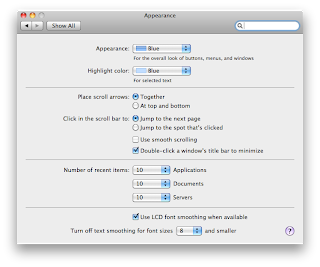 Below that option menu, is the Highlight color option menu; and if we want to know this color in our LiveCode scripts, all we have to do is check the global 'hiliteColor' property. But there's no built-in way to access the Appearance. So how can we get this information? Do we have to write an external to find out whether we should have blue or graphite custom controls?

As it turns out, we can get at this system setting by using the 'defaults' command via the 'shell' function. Just plop the following in a button script:


Click the button, and depending on your operating system and preferences setting, you'll see the appropriate message. It appears that at one point there were a few more appearances, but they were lost during a chopping frenzy in Cupertino. Be that as it may, you now have a way to check for the appearance setting in the preferences window.
Posted by Quartam Software - Jan Schenkel at 11:46 AM 3 comments: